Postulates for a European Reform Treaty

Thanks to the member of the European parliament, Richard Sulik, and his marvelous team. The “Le Rêve européen” by Didier Modi was presented to the parliamentary public and aroused great interest. The former member of the parliament, Dirk Eppink, took the opportunity to describe his concept of a parliamentary reform. Publisher and translator Markus C. Kerber underlined the pro-European character of the book and addressed his postulates for a European Reform Treaty to the public. (Weiterlesen …)

Mr. Eppink: A European Parliament without a People 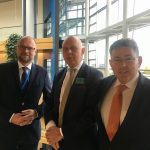